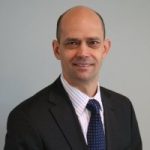 Dan Bader is Vice President of Business Operations for ELTA North America. Affiliated with ELTA Systems—a subsidiary of Israel Aerospace Industries—ELTA North America is one of the world’s leading designers and manufacturers of aerospace and defense systems for the United States government. The company’s surveillance products and services support troops, first responders, and security personnel in airborne, ground, and maritime environments. ELTA North America opened in Fulton, Maryland in 2012, in partnership with the Maryland/Israel Development Center (MIDC).

How did you transition from being a fighter pilot to VP at ELTA North America?

DAN BADER: When I grew up in the Air Force as a fighter pilot, I spent a lot of my time overseas. I had the opportunity to do flying exercises worldwide, sometimes in Israel. Being able to fly in that environment—the airspace is wonderful, the whole country is open to military aircraft and airspace. It’s a great training environment, great relationships. The opportunity to fly over the Med, the Dead, and the Red [the Mediterranean Sea, Dead Sea, and Red Sea] in one sortie is pretty exciting for a young captain in the Air Force. From those experiences, I got to be at Israeli military bases where the fight is—no kidding—around the corner. Live in that environment and see how they do business, just like any allied relationship, learning from each other: that was the basis, that was my opening to Israel and the Israeli Defence Forces. Years later, as I became more senior in the Air Force and was in charge of acquisitions and requirements, and commanded an operational flight test center, I had the opportunity to go back to Israel from a different perspective. Now, I’m going to understand how they get these technologies—are they available to the U.S.? And those programs, those opportunities led to Israeli capabilities coming to the U.S., being installed in U.S. fighter aircraft and other aircraft. From that, I learned the capabilities from Israeli industry—the capabilities that the Israeli defence forces use on a day-to-day basis. Once I retired from the military, I wound up doing some consulting work. Some of it was back to ELTA Systems in Israel. Now from the third side of this four-sided square here, I learned from the inside of an Israeli company their technology, their engineering, and was able to help market it back to the U.S. government agencies from understanding of how requirements are developed in the U.S. and how capabilities can be matched from Israel. And the final side to this, as a direct employee of ELTA Systems—ELTA North America—I now can put all that together understanding what the warfighter needs, what the US government needs, what Israeli industry can produce, and provide that warfighting capability to the U.S. warfighter.

Can you tell us why you decided to join the U.S. Air Force?

When I grew up in Long Island my neighbor, nice gentleman lived next door, older generation—I’m just a little kid—he would talk to me, and I found out that he was a B24 and B25 pilot in World War II. It sounded cool. I didn’t really know what that meant. But because of him and his mentoring I considered going to the Air Force Academy. And when I went to the Air Force Academy, I decided I wanted to be an astronaut. I wanted to be an engineer. Many passed to that kind of a career field, but in my area, the United States Air Force Academy, every single day at noon they flew something else over your head; it was a helicopter, it was a B52, it was an F4, it was an F16. You sort of get the picture: “I think they want me to fly.” So, about half of each graduating class from the Air Force Academy becomes a pilot. That neighbor who had that history and war stories from World War II was my motivation to consider the Air Force Academy, the Air Force Academy was my motivation to fly, and I had a 26-year career flying mostly fighters all around the world, living overseas for seven years, flying 58 combat missions in many different environments, being deployed everywhere. I’ve been to all seven continents, including Antarctica, all because of my air force career. It was tremendous opportunity and experience.