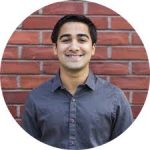 Param Shah is the co-founder and CEO of Fusiform Medical Devices. Fusiform is a medical technology startup that seeks to revolutionize orthotics—instruments, such as leg braces, that provide skeletal and muscular support. Fusiform’s approach combines 3D modeling with order tracking software to give customers custom-fabricated, durable orthotics faster than ever before. Earlier this year, the company was one of six chosen for Accelerate Baltimore’s incubator program. A Johns Hopkins University alumnus, Param also founded the Lotus Life Foundation: a nonprofit that offers medical intervention and education for children living with disabilities in rural India.

OFFIT KURMAN: Fusiform was founded in November 2014. Tell us about the launch—how did you and your co-founder Alex Mathews come together? Can you tell us about the Lotus Life Foundation?

PARAM SHAH: Essentially, the story of Fusiform starts in a rural village in India. In high school I started a nonprofit called the Lotus Life Foundation, which provided medical treatment to children with cerebral palsy, muscular dystrophy, and other disabilities of the sort. I spent three years with this foundation, up until now, creating orthotics and prosthetics pipelines to provide this sort of treatment to the children there. The idea for Fusiform started when I realized that the time it takes to get a device from the manufacturer to a patient in India took about a month going back and forth between the village, and making the device and mistakes only make it longer. By the end, that child has either trashed the device and doesn’t wear it, or because it doesn’t fit them correctly they have sores all over their legs. This was clearly a problem, and coming back to the United States I realized that the same problem occurs over here. It takes two to three weeks to make a device and there had to be a solution that basically just got better orthotics to people faster. Coming to Hopkins, I got a scholarship. It’s called the Hodson Trust Scholarship. Ten to twelve people receive it every year, and my co-founder received it as well. We were connected through a mutual friend, who was also a Hodson Scholar, and at that time I knew that I wanted to make a device that worked with the patient, that allowed the patient to grow with this device and not have to trash it—not have to continuously wait months for these devices. I came up with very bizarre ideas, but the general sound concept of having a device that lasted a patient longer and could also be received in a short amount of time was something resonated with Alex. He basically took my idea and made it into something real. His background is in 3D scanning. He’s done research with the Applied Physics Laboratory, where he used 3D scanning to 3D-print out implants. When doing craniofacial surgery, they remove a part of the skull from the patient, and he created the algorithms that allow them to take a scan of the head, see where the hole is in the skull, and 3D-print out an implant to put there. So, right up our alley. He basically created the solution to what my idea was and we started working together.

When did you realize you were an entrepreneur?

Entrepreneurship was never actually an interest for me in the beginning of college. I saw the Zuckerbergs of the world and all this happening, but I had no idea exactly how much went on in the entrepreneurship space. My mother passed away from cancer when I was 9 years old and that pushed me a lot towards being a doctor. Seeing how the surgeons took care of my mom, seeing how they could make a difference on a personal level really resonated with me and I chose to be a neuroscience premed from the fact that I wanted to help people. There’s a building at Johns Hopkins called Wolman and it’s named after Abel Wolman who was an engineer. Despite not being a doctor, he figured out how to chlorinate water, and cholera has been eradicated because of his invention. I realized that you don’t have to be a doctor to make a difference and to help people. What I chose, and what I thought was much more interesting to me, was making a device that doctors could implant to save millions of lives even after I’m gone. That sort of pushed me towards entrepreneurship and then I really discovered that bubble of entrepreneurship is itself how much went on in the industry and, honestly, how much I had to learn. It was daunting at first, but I had this entrepreneurial streak, I guess, that I didn’t have when I started my nonprofit. Like always, I started from the ground up and just learned as I went.