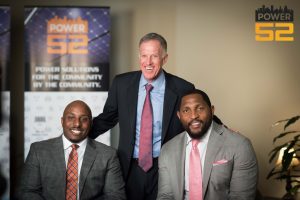 is a Maryland-based, 501(c)(3) nonprofit organization dedicated to reducing the cost of energy for low-income families by developing renewable energy projects. Established by electrical engineer and business pioneer Rob D. Wallace in conjunction with former Baltimore Ravens linebacker Ray Lewis, Power52 provides job training, employment opportunities, and scholarships to the communities it serves, with a focus on sustainable socio-economic growth and partnerships with local utility companies. Last year, the organization teamed up with BGE to build a community solar facility, increasing low-income customers’ access to solar energy. Rob is Power52’s President and CEO; Ray is its Vice President.

How did Power52 get its start, and when did you two first meet?

ROB WALLACE: It happened about a year ago. Ray and I were sitting and talking and reflecting on the events in Baltimore. We were watching it and we were saying, “This is absolutely crazy.” We were watching kids run around and do things that we know their parents didn’t teach them. We were watching the streets be destroyed—that was the image that was being created by Baltimore City and by the youth there. We said, “We have to do something different here.” We had the means and the responsibility to make a change. I’m a Poly grad from Baltimore city. I grew up in this area. I understand the dynamics. Ray’s been here 20 years. He has been in Baltimore more than he’s been anywhere else. So we had an instant connection there, on what can we do to improve the hope and the economics for the youth in Baltimore City. That’s where it started.

RAY LEWIS: I remember the moment we sat down how our visions aligned so quickly. When I started to tell him what my real passions were: “How can we put a real positive spin on Baltimore?” I hated what the outside media was able to do to Baltimore, to create this ugly storm—as if, “Oh, this whole city is burning! Everything is going crazy!” And you may have ten people that are really doing all of this. The moment we saw that, man, I was like, “Okay, bro, look—let’s put something together because I’m on the ground, I’m doing what I’m doing, but we need something that they can call their own. That’s how Power52 was born.

ROB WALLACE: And given our experience with renewable energy under Bithenergy, we have experience putting these types of deals together. We know what the opportunities are, the jobs that can be created from an economic opportunity like this. And so looking at how we do solar farm: there are major components from the construction, module placement, racking, inverters, wiring—that can be done. That’s a task and a skill that can be taught, and that these youth can be applied to so they can come and make some money. Instead of doing nothing, instead of hanging out, let me teach you how to fish so you can go fish for yourself, you can go provide for your families. That’s how we figure Power52 can impact the community, not by just giving out money—a lot of organizations give out money—but we are training and placing in jobs. We are training and putting them into real opportunities where they’re going to make a salary. They’re going to have health care. If they want to go to school, they are going to have money to go to school. And that’s the difference between Power52 and a regular 501(c)(3): we train, we place, we teach them how to fish, and then they go fish—and we make sure they go fish. That’s the difference here in how structure it, and we are both very adamant about that. That’s the main focus.

Tell us about your work with Bithenergy.

ROB WALLACE: I’m director of technical sales for Bithenergy. We’re based in Baltimore City. My father is a Baltimore City native. He grew up in Cherry Hill—South Baltimore. I could remember as a kid him taking us down to Cherry Hill and showing us where he grew up: in the two bedroom row home, five of them in the bunk bed upstairs, single mother—typical picture of what society is today for the most part, right? And we said, “How do we go and change that?” We moved our headquarters from Columbia to Baltimore City. We’re tax based there, we pay taxes there. We are investing back in the community. That’s the exact same reason why Ray and I have located the training facility in Park Heights. It’s right in the city, where the help is needed, where we can have a direct impact in the city. We’ve also done multiple jobs within the city. We did Coppin State’s renewable energy system on their rooftop, 500 kW. Chimes International, which is in Baltimore, was our first system that we’ve done. University of Maryland Medical Systems. We did all the EV chargers for Under Armour, for University of Maryland Medical System—their whole network. So we have great experience and relationships in Baltimore. That’s why we chose to focus here.

But this is just the beginning. So, Baltimore is our hub where we are starting, but our plan is to take this nationally and even internationally—going to Chicago, going to Philadelphia, going to Miami, impacting. These economic opportunities are not just in Baltimore; it’s bigger than that. And the dynamics of Washington, D.C. aren’t that much different than Baltimore. If you look at the low economic areas, it’s the same. Tou have the same main things that are happening: lack of opportunity, lack of hope. They need encouragement.

RAY LEWIS: It’s about rebuilding our cities. Solar energy is just one of the catalysts that can get it done. Not just me and Rob—but I think there are a lot of people in Baltimore that are not highlighted enough and who really on the ground trying to change this city.