When a magazine launches, one of the core questions its editorial team faces is who or what to present on its cover: Which image or figure will stand for everything the publication hopes to represent? For its inaugural issue, the Greater Baltimore edition of Attorney at Law Magazine found its answer in Theodore “Ted” Offit, founder and managing principal of Offit Kurman Attorneys at Law. 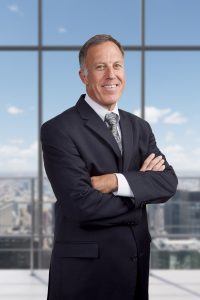 Attorney at Law Magazine Greater Baltimore is a publication for and about the Baltimore legal community. Each month, the magazine will feature a noteworthy attorney and law firm, highlight local events and industry news, and offer perspectives from a rotating roster of expert contributors. Ted was named “Attorney of the Month” for the magazine’s 2016 preview issue. The cover story profiles Ted, charting his career from his early days as an accountant to his present leadership role at the firm he started with his brother Maurice and their friend and colleague Howard Kurman. The article explores how the founding team recruited the approximate 250 employees and 120 lawyers who comprise Offit Kurman’s present-day incarnation, and offers a glimpse into the firm’s future, as well as Ted’s succession plans. The Greater Baltimore edition of Attorney at Law Magazine’s 2016 preview issue also features tips for improving negotiation skills, considerations for outsourcing legal support, ten steps to avoid malpractice claims, and more. Contributing editors include Vangel Inc. Principal Valerie Androutsopoulos, legal analyst Kris L. Canaday, tax attorney Robb Longman, and professional liability advisor Pat Warrington. Andre Denault is the magazine’s Publisher. “I’m floored by this extraordinary honor,” Ted said of the article. “It’s not every day that you end up on the cover of a magazine, let alone that magazine’s first issue, ever. All of us at Offit Kurman would like to thank Attorney at Law Greater Baltimore for providing us the opportunity to tell our firm’s story while bringing this exciting publication to life. We look forward to the magazine’s continuing coverage of our community, and wish its team a long and successful future.” To read the article, click here. The online version of the 2016 preview issue of Attorney at Law Magazine Greater Baltimore can be accessed in its entirety here.