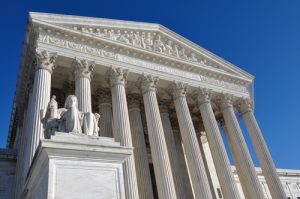 In 1974, Congress enacted the Employee Retirement Income Security Act, known as ERISA.  In passing ERISA, Congress established uniform reporting, disclosure and recordkeeping requirements for employer-sponsored group benefit plans. ERISA replaced the patchwork of state laws governing benefit plans both to minimize the costs of compliance and make the pension and health-related benefits provided by employers more secure.  Since 1974, the power of ERISA, and its offspring, including COBRA, HIPAA and the Affordable Care Act, has been safeguarded by the legal doctrine of pre-emption.  Pre-emption means that ERISA overrides “any and all State laws insofar as they may now or hereafter relate to any employee benefit plan.” Earlier this month, the U.S. Supreme Court considered the issue of ERISA pre-emption in connection with a Vermont law that requires entities that provide health care services to report information to a Vermont state agency.   The purpose of the Vermont statute is to allow the state to compile a database reflecting health care utilization, costs and resources devoted to Vermont residents.  When Vermont served a subpoena on a health plan administrator seeking health care documents, the plan sponsor and administrator, Liberty Mutual Insurance Co., filed suit in the U.S. District Court in Vermont challenging the subpoena on the ground of ERISA pre-emption.  The District Court ruled for Vermont but the U.S. Court of Appeals for the Second Circuit reversed.  An appeal to the U.S. Supreme Court followed. In Gobeille v. Liberty Mutual Insurance Co., the Supreme Court held that the Vermont statute was pre-empted by ERISA.  The Supreme Court noted that ERISA established extensive reporting, disclosure and recordkeeping requirements for welfare benefit plans and that the Secretary of Labor, not the states, is authorized to administer the reporting and other requirements of ERISA.  The High Court held that Vermont’s reporting regime both intrudes upon “a central matter of plan administration” and “interferes with nationally uniform plan administration.” ERISA’s requirements are both a boon and a trap for employers and the welfare and pension plans they sponsor.  Under the pre-emption doctrine, ERISA overrides the laws of the states that relate, now or in the future, to regulation and enforcement of the rights and duties of plans and their participants. The boon: ERISA supplants state laws and remedies.  The trap: Employer sponsors and their plans need to be up to date on their compliance with the ever-changing landscape of ERISA.

If you have questions about this, please contact us.

Offit Kurman is one of the fastest-growing, full-service law firms in the Mid-Atlantic region. With 120 attorneys offering a comprehensive range of services in virtually every legal category, the firm is well positioned to meet the needs of dynamic businesses and the people who own and operate them. Our eight offices serve individual and corporate clients in the Maryland, Delaware, New Jersey, and Northern Virginia markets, as well as the Washington DC, Baltimore, Philadelphia, and New York City metropolitan areas. At Offit Kurman, we are our clients’ most trusted legal advisors, professionals who help maximize and protect business value and personal wealth. In every interaction, we consistently maintain our clients’ confidence by remaining focused on furthering their objectives and achieving their goals in an efficient manner. Trust, knowledge, confidence—in a partner, that’s perfect. You can connect with Offit Kurman via our Blog, Facebook, Twitter, Google+, YouTube, and LinkedIn pages.  You can also sign up to receive Law Matters, Offit Kurman’s monthly newsletter covering a diverse selection of legal and corporate thought leadership content.