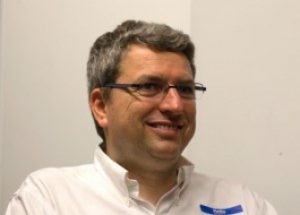 Yuval Boger is the CEO of Sensics. A recognized leader in industries such as aerospace and education, Sensics has been developing head-mounted, panoramic virtual reality (VR) displays for nearly 20 years. Yuval joined the company in 2006, helping to bring its initial commercial product—the piSight—to market. The company’s collaborators, partners, and customers include giants such as GM, Boeing, Microsoft, Canon, Siemens, Saab, Honda, and NASA, as well as various academic institutions around the world. Sensics is based in Columbia, Maryland. Yuval Boger spoke with citybizlist founder Edwin Warfield for this interview. EDWIN WARFIELD: Can you take us through your revenue model? YUVAL BOGER: Today, we’ve got a business that stands on three revenue pillars. One of them continues to be the professional market—high-end customers, whether it’s universities or defense or industrialists, and so that’s still in place. The second one is our low vision products helping people with vision disabilities. The third one is the open source and open source gaming. It turns out that all these three areas share a core of technology, whether it’s understanding an optics or ergonomics or software or FPGA design and so on, and so one can certainly feed off the others. Our investors certainly took some convincing, but we were steadfast in our belief that that’s the way to go, and I hope we’ll be proven right. How has the industry changed since you first started out? It used to be very, very small. It used to be a couple of companies making head-mounted displays. We would go to trade shows, where there were seven exhibitors and everyone knew everyone else, and that was about it. Now it’s exploding and it’s exploding in multiple ways. There are basically two or three basic configurations for head-mounted displays. One is phone-based, where if you have a phone or a smartphone—Samsung or an LG or Motorola or whatever phone you have—you already have a very nice screen, Internet connectivity, lots of processing power, memory… Basically, you have a computer in your pocket, so if I can put that here and put a couple of lenses and maybe some other peripherals, that’s an everyman’s virtual reality device. So, that’s one direction that you’ve got tons and tons of vendors in. Say I have a better lens and I have a nicer head strap, and I’m going to paint it pink and I’m going to have this, that of the other. Then the others are PC-based gaming where users have a virtual reality goggle that connects to a PC or to a game console. Sony, for instance, has announced one. Facebook has a PC-based device, and so on and so on. Our strategy, because these are very large companies—and yeah, we don’t have the budget or the time to create an end-user brand—we decided to go essentially with Sensics Inside, the OEM [original equipment manufacturer) route, where we would say, “Look, we’ve got 10 years of experience, expertise, technology, assets. We know things; we’ve learned things that you don’t know yet, and we have forgotten things that you haven’t learned yet. So we can work with you, consumer electronics company or medical company, to get your product to market much, much quicker by working with us on the open source project. You would benefit from a lot of partners that are already integrated there, from a lot of content that already exists.” So, we want to be the engine inside many of these solutions going forward as opposed to a Sensics shelf in Best Buy. After virtual reality goggles hit the market, what do you think is next? I think that once you put on the goggle and have some computing power on your head, the next thing is sensors. For instance, yeah, looking around is nice, but what I would like to do is touch virtual objects, or manipulate, or imagine that I have sort of a Windows desktop and I can move things around. It’s not just about what I see, but you want to sense where my hands are, where my fingers are. Maybe if you’re playing a game, you want to see my heart rate—if I’m excited, if I’m too excited—maybe you want to track my gaze direction, where I’m looking at. So if you were an avatar in a game, you could say, “Why are you looking at my nose—what’s wrong with my nose?” Or, “Why are you looking at me? Why are you looking at the door behind me?” So, sensors become very important and when you look at wearables, whether it’s a wristband or maybe jackets or shirts that have sensors that can tell you your hand position, that becomes very important. I think the goggle could become the sensor hub for a lot of things that go on, and so it’s certainly feasible that we would work with an Under Armour or many other companies to get the data that they already have into the game, into the goggle.