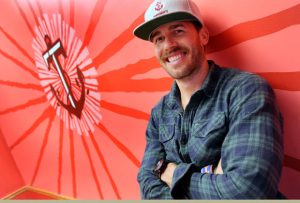 Greg Vetter is the CEO and oldest brother at Tessemae’s All Natural. Based in Annapolis, Tessemae’s grew out of a family recipe: when Tesse prepared a lemon garlic dressing to encourage her three athletic sons to eat more vegetables at dinner, the recipe was an immediate hit among the brothers, and Greg told his mother they should go into business together. Years later, the brand is a regular staple at supermarkets nationwide, offering a wide selection of condiments and marinades all made from natural ingredients with as few additives and preservatives as possible. In 2014, Tessemae’s received recognition as Inc.com’s Young Company of the Year. How did you first fund Tessemae’s? GREG VETTER: I was doing employee benefits, which is insurance-based commissions that get paid residually, so that helped. I was literally just stroking checks out of my checking account. I took out 25 credit cards and I liquidated my wife’s 401k and my 401k, and we started buying raw materials and paying people with those and all of that. It got to a point where we had maxed out everything, and so we needed to get a line of credit with the bank, but we had nothing to show. We were not bankable by any means. So, I called my dad and I said, “Hey man, we need to sign over your house and that buildable lot to the bank as collateral so we can get a lot of credit.” And he just kind of laughed and goes, “I’ll do it. And if this doesn’t work, we’re all going to be living in trailers—I just want to let you know that.” I’m like, “I’m very aware.” Once we got that line of credit, that allowed us to jump a couple more regions, and really continued to build the story of changing the way food is made in the United States. Then, we were able to go to friends and family and we said, “Hey, we got a national deal with Whole Foods—we gotta deliver on that.” We raised about a million dollars of friends and family and that was through, I don’t know, 30 people. All of them, all the friends and family—thankfully they’re still friends and still family—jumped on, which then allowed us to leverage that. We go national with Safeway, get into Costco, get a national deal with Kroger, which then allowed us to get some angel investors involved, which then put us in a situation to then take on the larger chunk of money from the Sagamore Venture crew. What challenges have you faced keeping the product additive-free on such a large scale? Did your attitudes about manufacturing have to change? We didn’t want to mess with the food or the product. When you’re a small business, anybody that has a recipe, the first thing they think is “how am I going to bottle this stuff?” And so it’s “oh, go find a co-packer and they’ll do it.” So, you go to a co-packer and they say, “This is the bottle that you’re going to use, and this is the label, and this is the cap, and here’s the recipe but we’ve had to tweak it because we don’t currently buy those materials. We’re going to put some xanthan gum in it, so it’s thick and it flies through the machine properly. We’re going to essentially kill it all through acidification and hot filling it, so it will be shelf-stable and it can survive a nuclear apocalypse. Here’s the product that you have.” And when it comes out, it’s no longer the product that you initially wanted to start a business off of. So, we met with some people and I experienced citric acid for the first time. It was a bucket that had warning signs on it that said “if this gets on your skin, immediately run to the burn station because your skin will be melting off.” I’m like, “So, this goes in it? In the food?” You know, like, “Yeah, yeah it’s totally safe to eat.” I’m like, “But it’s not safe to go on your skin.” And they’re like, “No, it will burn your skin right off.” Huh. That doesn’t make a lot of sense to me. So, we decided that if we were going to build this brand and we were going to make this product that everybody loved, that we’re going to have to start our own manufacturing facility. We decided that we could innovate the machinery, and not the product, and so we made a couple of very common sense adjustments here and there, and shortened some tubes and did some stuff, and next thing you know we were making clean, cold-filled dressings and condiments in a way that people said couldn’t be done. Sometimes it just takes a stubborn person to just say, “I don’t care how you’ve done it. I don’t care how many products are on the shelf that do it this way. I’m going to do it this way, and if it fails, then it fails on my watch—but if it works, you’re going to be in some big trouble.”