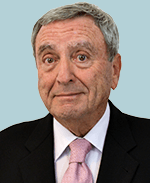 Offit Kurman today announces that business and real estate attorney Bernard S. Denick has decided to change his position at the firm from Principal to Retired Counsel. Effective January 8th, Mr. Denick’s new status begins a transition phase in a long and respected career of legal accomplishments and generations of service to members of Maryland’s business community and their families. In moving on from his current role, Mr. Denick will hold the distinction of being the first member of Offit Kurman’s Retired Counsel Group. As the inaugural member of Offit Kurman’s Retired Counsel Group, Mr. Denick will continue to communicate with clients and participate in the transition of clients he has serviced for many years to other lawyers at Offit Kurman. He will remain part of the Offit Kurman team of attorneys in his new Retired Counsel status. For more than 45 years, Bernie Denick has provided strategic and comprehensive advice to organizations large and small, international and domestic. His clients have ranged from family-owned businesses to multinational corporations to nonprofit and quasi-governmental entities, many of whom have played an instrumental role in revitalizing the economic development of Baltimore and Maryland at large. Recognized as a top-performing attorney in his state, he has received the highest professional (AV) rating for his work from his peers, as reported by Martindale-Hubbell. Mr. Denick became a Principal at Offit Kurman in 2001, during the firm’s first lateral affiliation transaction, as one of several attorneys to join from the former Baltimore law firm of Blum, Yumkas, Mailman, Gutman & Denick P.A. That association would lay the foundation for Offit Kurman’s business plan of growth by acquisition: one year later, the firm doubled in size—from 10 attorneys to 20—as a direct result. Today, thanks to the same strategy, the firm employs over one hundred law practitioners throughout the Mid-Atlantic region. Although his tenure at the firm began fifteen years ago, Mr. Denick’s involvement in Offit Kurman’s legacy can be traced back to 1984, when he hired Offit Kurman Managing Principal Theodore “Ted” Offit as an associate. Mr. Denick was an active mentor to the young Mr. Offit. “While we wish Bernie the best in this next chapter,” said Offit Kurman Managing Principal Theodore “Ted” Offit. “Bernie will be missed greatly at Offit Kurman, especially by me. Bernie taught me all about the practice of law, and I am referring to more than the technical skills. He taught me how to conduct myself as a lawyer with clients, colleagues and adversaries, and he taught me about the business of practicing law and how to market and originate new business. Bernie even taught me how to play golf and how to get business on the golf-course. I am forever grateful and appreciative of Bernie’s mentorship, support, and continued friendship.” Please join Offit Kurman as we bid Bernie farewell and wish him a successful transition to his new position as Retired Counsel.

Offit Kurman is one of the fastest-growing, full-service law firms in the Mid-Atlantic region. With 120 attorneys offering a comprehensive range of services in virtually every legal category, the firm is well positioned to meet the needs of dynamic businesses and the people who own and operate them. Our eight offices serve individual and corporate clients in the Maryland, Delaware, New Jersey, and Northern Virginia markets, as well as the Washington DC, Baltimore, Philadelphia, and New York City metropolitan areas. At Offit Kurman, we are our clients’ most trusted legal advisors, professionals who help maximize and protect business value and personal wealth. In every interaction, we consistently maintain our clients’ confidence by remaining focused on furthering their objectives and achieving their goals in an efficient manner. Trust, knowledge, confidence—in a partner, that’s perfect. You can connect with Offit Kurman via Facebook, Twitter, Google+, YouTube, and LinkedIn.