Providing commercial equipment, parts, and repairs to the region’s businesses for over 85 years 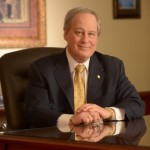 Roger Kauffman is the CEO of Electric Motor Repair Company (EMR), a service company based in Baltimore, Maryland. For more than 85 years, EMR has served generations of businesses across the Mid-Atlantic region. The company splits its service areas into two divisions: Industrial and Commercial Kitchen. EMR’s Industrial division handles equipment installation, repair, and fulfillment in industrial, printing, elevator, and processing settings; while the company’s Commercial Kitchen provides parts and services in the commercial cooking and refrigeration industries. Last year, Roger celebrated his 50th anniversary at EMR—he joined the company in 1964 as a repair technician. You joined EMR in the 1960s, following your father’s lead. How did he initially get involved in the company, and how did your family come to own it? ROGER KAUFFMAN: My father got into the business by starting to work for four gentlemen that owned the business, as the office manager. They had a department that was losing money, and gave him the chore of trying to straighten it up, which he did. Because of his success, they turned the rest of the company over to his oversight, and through that process he and the principal owner had an agreement that when the owner retired, my father would be able to buy the business. After that, the owner had a heart attack and died, and the wife of the owner—her brother came in and then naturally he wasn’t a president, to which my father went and saw—Mrs. Byshaw was her name—and said, “I don’t know if you remember or know that your husband and I had a deal that I’d be able to buy the company when he retired.” And she says, “I do know, Harry,” and she threw her brother out and sold the business to my father. So, on a very precarious note or handshake, my father acquired the majority ownership of the company and, over the years, bought the other three owners out. That’s how the Kauffmans acquired the company. Was EMR always a commercial operation? Early on, one of the backbone departments in the company was the household portable appliance department. They would fix vacuum cleaners, irons, fans. Back then, they didn’t have air-conditioning, so everybody had a fan. And over the years, the cost of the product got cheaper and cheaper. The cost of repair of the product became more expensive, to the point that I had to eventually close that operation just because the cost of a new blender jar was more than the cost of a whole blender from Kohl’s or some place like that. We gradually went into the commercial side of appliances, through the portable appliance operation. Manufacturers that made steam irons and girdles for the home started to make products for commercial kitchens—Westinghouse, Hotpoint—and we represented them in the domestic side. They came to my father and said, “You’re already doing the domestic stuff—do you want to do the commercial?” My father was always interested in growing, so he said “yes” and we hired our first commercial cooking repair tech, who I understand they had to go and retrieve from the bar every once in awhile, in order to go do the work that they had to, do but that’s the humble beginnings of the commercial side of the business—which now is, again, the backbone of the business. How has EMR expanded since then, and what role have you played in the growth? We started out just being a Baltimore operation. When I took over and started to have more authority in the company, we expanded over to Silver Spring, just out of DC. It was our first branch operation. From that, we’ve grown to the northern Virginia area, Salisbury eastern shore, and the Delaware Valley, which encompasses Jersey, Delaware and Philadelphia. Our plans to expand go a little further west, into western Maryland, West Virginia—specifically Morgantown, West Virginia and the Deep Creek Lake area. And next year, toward the end of the year, we’re going to Virginia Beach and Norfolk to go further south of Virginia. My idea, eventually, before I die or retire—whichever comes first—is to be in North Carolina. I want to be that far south.