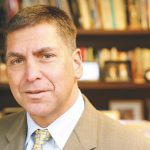 Marc Terrill is president of The Associated: Jewish Community Federation of Baltimore. The Associated is a philanthropic organization that helps fund local programs to strengthen the local and global Jewish communities. For nearly a century, The Associated has been the hub for Jewish faith-based care and investment in Baltimore, and works with over 25 agencies and programs, as well as a number of corporate partners, to enrich the community and shape the city’s future. Today, the organization is able to give 89 cents for every dollar earned back to its vast network of causes. Supporters can contribute financially, volunteer, or join The Associated as a lay leader. Tell us a bit about working for The Associated. MARC TERRILL: Over the last decade of being at The Associated, it’s been an incredible journey. There has been a number of different ups and, quite honestly, downs of what’s going on in the world that’s impacted nonprofits as well as the Jewish world and Jewish life, and just citizens of the world. So it’s been an incredible ride of incredible learning experiences and of achievement in bringing people together around a common cause. How is The Associated set up? The Associated is organized in a very unique way, where there’s centrality in planning and data collection and fundraising and we have 12 beneficiary agencies that literally serve the community, and then some from birth to death. We have agencies in terms of early life cycle like the Jewish Community Centers of Greater Baltimore—that has a preschool, it has athletic events, it has all different types of things—and on the other end of the spectrum we have hospice services that are sponsored through Jewish Community Services, and everything in between. One of the things that has been difficult over the last ten years has been the economy and people have felt it in a major way, so whether that’s with emergency cash assistance through Jewish Family Service or its vocational service, or even counseling, the system of agencies of The Associated—12 of them locally—have been there to support the community. How did this year compare to previous years in terms of fundraising? The annual campaign of The Associated closed at a little over $30 million this year. Now having said that, our audience that we really fundraise from is essentially the Jewish community. So, 93,000 Jews in Baltimore, we raise a little over $30 million as I had said. Per capita, one thing that we’re really very proud of is our federation: our nonprofit in the Jewish world is the highest per capita giving of any nonprofit in the country. So, 93,000 Jews that are basically contributing $30 million to the annual campaign, but then to other projects over and above like capital improvements, like Tsunami relief, like hurricane relief, like issues in Baltimore City, whatever it might be. We’ve come a long way. In the last, I would say, 10 or 20 years, we have gone from $18 million to $22 million to $23 million, and so forth and so on, so we continue to go up. As a matter of fact, we are one of the only non-profits even after 2008 that continues to go up in our fundraising achievement. Having said that, we’re keeping pace with inflation and cuts that are happening in the public sector, which are just a reality of the day that keeps us on our toes. So, even though we’re going up, we can’t rest on our laurels. We’re always going to need more in terms of financial resources to take care of the issues at hand. What drew you toward The Associated initially? The reason that I really pursued The Associated was for my career development. I didn’t grow up in Baltimore. I grew up in Miami, Florida, but I kept on hearing about this special place called Baltimore where people really care deeply about community, about making a difference, and I have to tell you—just by luck or fate or whatever it was—I ended up being extended an invitation to come work in Baltimore, and I fell in love. In terms of why a Jewish organization, it’s completely aligned with my values of respect for the other, of emphasis on community, on education, on collaboration. I could work for many organizations in terms of my likes and the things that I would want to pursue, but The Associated is well suited for me because of its emphasis on collaboration, on innovation, on working with other faith-based communities and other nonprofits, and I just feel like I am one of the luckiest people in the world to be doing what I’m doing. I’ve said on many occasions publicly that the secret sauce at The Associated is the volunteer and professional leadership, that we have incredibly bright people who are incredibly passionate and incredibly skilled. Having said that, we also have a process of nourishment, enrichment, and in building a person’s portfolio, so that when they reach a certain leadership position, they’re prepared. We have young leadership that talks in their curriculum about fundraising, about meeting management, about building teams. We have on that spectrum—the early-on spectrum to at the end of the spectrum, or towards the top of the spectrum, may I say is where we have customized training and education and stewardship from one chair of the board to the next. Right now the current chair of the board is in his last year of his term, and we’re starting to meet with an incoming chair of the board so that she understands the issues, the dynamics, the nuances, the politics, the personalities, the perspective, and is prepared to step into that world on July 1 with earnestness and gusto.