Click here for part 1, part 2 Improving the quality of life and work for low-income families through donated vehicles 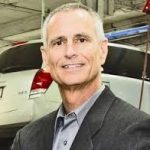 Marty Schwartz is the president, CEO, and founder of Vehicles for Change. Established in 1999, Vehicles for Change provides low-income families with donated, renovated cars, as well as technical training for jobs in the automotive industry. The organization has awarded nearly 5,000 cars thus far, for a net impact of 16,450 lives improved. As a result of their involvement in the program, VFC recipient families earn better jobs and higher earnings, along with an average reduction of 90 minutes in daily commuting time. EDWIN WARFIELD: What’s the greatest challenge facing the organization today? MARTY SCHWARTZ: The biggest challenge is and has always been car donations. There are 60,000 households that need a car. I think the state of Maryland would be pretty upset if we walked out tomorrow and laid 60,000 cars on the road, but that’s the only way a lot of these folks are going to get to work. But we have actually created a new program where we’re putting a pilot project in East Baltimore that’s going to be a more comprehensive transportation package. We’re looking at doing something in a specific neighborhood, so we’re working with the [Annie E.] Casey Foundation to put this project in East Baltimore. We’re going to provide some really up-to-the-minute information about bus opportunities. We really want to get people in public transportation if we can. We’ve got a van share program that we’re putting together hopefully with Sojourner–Douglass [College], who has a van program. We’re going to provide people information about that, do some cars in the neighborhood, and then we’re also going to build a database of individuals in the neighborhood who have an automobile and where they’re going to work and see if we can create some carpooling opportunities for folks. We really feel we need to be more active and have greater impact in transportation in the region, so this is a pilot for the next year and we think it’s going to be very successful. It’s something we will build throughout the city at some point, and take with our program everywhere we go. And what’s the most rewarding part of Vehicles for Change? The most rewarding part is having the opportunity to make opportunities for children. One of my favorite stories: we had a young woman who got a car from us five years ago. When she got her car, her son was there, and her son at the time was 14 years old. He was going into highschool and he was 6’2” and 195 pounds. This young man was just ecstatic that he was getting a car, and I knew he was only 14 years old—I mean he was bouncing he was so excited—and I went up to him and I said, “Why are you so excited?” I said, “I know you can’t drive yet.” And he said, “I get to play highschool football.” And so it’s the opportunity, because if Mom doesn’t have a car nobody can pick him up after school and he can’t get home. The neat part of this story is that four years later we found this young fellow. He was now 6’6” and 295 pounds, and had a full scholarship to Virginia—I believe it was Virginia Union [University]—to play football. So, those kind of stories and that kind of opportunities that we know that we’re providing for young kids that they would never, ever have if we weren’t able to help them get access to a vehicle. What does long-term change look like for you? Until we find a way to provide transportation for our families that are living in these neighborhoods that are just stricken with poverty, and we saw what happened with the riots, we are not going to change anything. I mean there are no jobs in those neighborhoods. You can go and give everybody who lives in those neighborhoods a Ph.D., and guess what? They’re still going to be poor. You can go and give everyone of them a medical degree, but if they can’t get to the hospital and get a job, they’re still going to be poor, and you’re still going to have crime, and you’re still going to have kids at home without parents. Time and time again, research has been done that shows that transportation is the number one issue that we have to tackle for people in low-income neighborhoods, before anything else. We’ve got to find a way to solve that. A car is a great help, but we’re not going to provide 60,000 cars to families. It’s just not going to happen.