Defining success as resilience in all forms of business 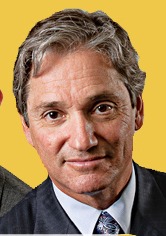 Doug Strouse, Ph.D. is an executive, consultant, author, and classic “jack of all trades” within Maryland’s business community. As the president of the CEO Club of Baltimore—which he founded—Doug oversees a board of advisors who work with leading regional companies. As managing partner of Wexley Consulting, he provides executive coaching for organizations around the world. An esteemed facilitator, adviser, writer, and speaker, Doug has applied his doctorate in Organizational Management and Organizational Psychology to work with various Fortune 500 companies. His experience comprises outsourcing, legal services, strategic planning, performance management and more. He is also the author of more than 110 professional articles. This past August, Doug and his co-authors Drs. George Every, Jr., and Dennis McCormack published Stronger: Develop the Resilience You Need to Succeed, which Examiner.com called “an excellent book for anyone looking for advice on how to strengthen their character to meet the demands of a busy lifestyle.” EDWIN WARFIELD: Tell us about the book you just wrote. DOUG STROUSE: I was one of three authors of that book, Stronger, published by the American Management Association—just came out August 8th this year, 2015. We’re really, really excited. American Management Association has gotten behind the book. It’s been out for a couple of weeks now, since August 8th, and we’ve been doing radio interviews across the country. We got reviews by CNN and Forbes magazine. I’m really, really proud of the book. It’s a fascinating book. One of the authors is a clinical psychologist. I’m an organizational psychologist. The other author is a counseling psychologist, but also one of the original Navy Seals from the 1960s. And some of the stories are just so fascinating. What we talk about, if we really break it down into five core components, is what makes up the factors of resilience. We offer stories about some famous people. We interview people like Cal Ripken; Erika Brannock, the lady that lost her leg at the Boston Marathon in April of 2013; Jim Craig, the Olympic hockey hero. We talk about Michael Jordan, and we talk about people that have failed and what they learned in failure, how they were able to bounce back and even be stronger than ever before. That’s really the essence. You know the book is entitled Stronger: lessons learned from the U.S. Navy Seals and other extraordinary people and how to develop that resilience you need to succeed. Because, if you haven’t failed at something, you probably should hurry up and fail, as Al Neuharth founder of USA Today, said, because you probably won’t be a success until you’ve failed at something. You can’t really appreciate the platitudes of success until you’ve experienced the low points in your life when you’ve failed. Could you dig into some of the core ideas of the book? One of the things we talk about is this concept of active optimism. And whether you’re a Navy Seal or whether you’re a tremendous athlete, or whether you’re a neurosurgeon like Dr. Ben Carson—we had the privilege of interviewing him as well before he declared he was running for president—is the concept that you can take control of your life. People who are active optimists, they not only think good things will happen to them, but it’s a belief that you can make those things happen. That’s one of the essences of the Navy Seals: they expect things to happen, they expect to win. And some of these giant athletes, you know, the very successful athletes: they expect to win—but they understand that failure is on the other side of the equation too. We talk about, in the book, Michael Jordan. You know, Michael talked about taking over 9,000 basketball shots in his career. He’s lost close to 300 games, and, interestingly, he talks about 26 times he was asked to take the final shot in a game, and he did not succeed. So, it’s not always a straight, upward spiral to success. It’s understanding that everybody—everybody, folks—has been in a position of failure, and it’s how you get back on your feet, and learn from that, and even reach greater heights.