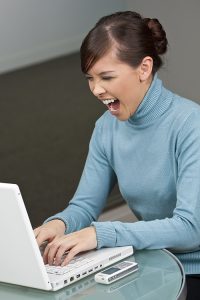 What differentiates a bellyaching Facebook status from protected speech for the purposes of legally protected activity or collective bargaining?  And when can an employer decide it’s had enough and take action to stop the offensive and hurtful posts? These are just a couple of the difficult questions raised by the popularity of social media in the workplace—questions business owners, HR professionals, labor and employment attorneys, and members of the National Labor Relations Board (NLRB) must resolve on a regular basis. The answers haven’t come easily. When the NLRB first formed 80 years ago, no one could have foreseen a world in which many of us work entirely behind computer screens, let alone have conceptualized modern international computerized social networks like Facebook, Twitter, and Instagram. Nevertheless, the NLRB has become one of the governing authorities on job-related social media use. Since 2011, the NLRB’s General Counsel has published several memos illustrating results of the agency’s investigations into social media cases and offered guidance regarding overall workplace policies. Here are a few highlights.

An employee of a nonprofit social services provider believed there were operational deficiencies at the nonprofit. She planned to speak to the executive director about her concerns. In anticipation of that meeting, she posted a message on Facebook outlining her concerns, and invited her colleagues to comment. Four took her up on the offer. The very next day, the concerned employee and all four colleagues who participated were terminated. The employee filed a charge with the NLRB, which determined that the Facebook discussion was a “textbook example of concerted activity”: the employee appealed to her coworkers for assistance, and the conversation addressed working conditions (i.e. job performance and staffing level). The NLRB also found that, despite some swearing and sarcasm laced throughout the messages, such language was “objectively innocuous”—that is, it had no effect on the protected subject matter.

An employee, using her home computer (and on her off-time), posted a negative remark on her personal Facebook profile about her supervisor. Her status drew responses from co-workers, leading to further negative comments, including one that called the supervisor in question “a scumbag.” She was subsequently terminated for violating the employer’s internet policy, which prohibited employees from making disparaging remarks when discussing the company or a supervisor, or depicting the company in any media format without permission. The NLRB concluded that the posting did not interrupt the employees’ work, because it occurred outside of the workplace and during non-work time. The agency also determined the employer’s blogging and internet policy was unlawful, stating that “prohibiting offensive conduct and ‘rude or discourteous behavior’ was overbroad and proscribed no limiting language to remove the rule’s ambiguity in prohibiting Section 7 activity.” In other words, the employer’s policy did not carve out an exception informing employees it did not apply to NLRB-protected activity.

A sports bar and restaurant terminated an employee over a Facebook conversation, and threatened to sue her for defamation. In this case, when staff of the establishment learned they owed additional state income taxes related to their prior earnings, one employee posted her dissatisfaction on Facebook over her employer’s failure to withhold the amounts.  Disgruntled co-workers added to her post. Ultimately the NLRB concluded, among other holdings, that an employer’s threat to sue a former employee for engaging in protected concerted activity violated Section 8(a)(1) for “unreasonably tend[ing] to interfere with the employee’s exercise of her rights under Section 7 of the NLRA.” The agency also found that the employer’s policies had a chilling effect on employees because it subjected those employees to discipline for engaging in “inappropriate discussions about the company, management, and/or co-workers,” yet it failed to define the term “inappropriate.” The bottom line: according to the NLRB, employee posts on social media about commissions, tax withholding practices, job performance and staffing constitute protected concerted activities. What about employee activities that are not protected by the NLRA?

This case involved a newspaper reporter whose employer encouraged him to open a Twitter account and use social media to publicize stories. The reporter opened the account, picked his own handle, and controlled the content of his tweets. In 2010, he posted a tweet criticizing the copy editors in charge of the paper’s sports department. No evidence exists suggesting anyone else shared his concerns. A week later, the newspaper’s HR director called him in for a meeting and asked him why he posted on Twitter rather than discussing his concerns internally. In response, the employee asked if the paper had a social media policy. The HR director told him it was “being worked on” and requested that he not air his grievances publicly. However, the journalist continued to post critical tweets, as well as tweets about homicides outside of the purview of his beat. He was again asked to refrain, and was ultimately discharged for disregarding guidance against posting comments disparaging the publisher. The reporter filed an unfair labor practice charge with the NLRB, but the board concluded his termination did not violate the NLRA. Why? Since he was the only one posting derogatory remarks, his actions did not constitute protected concerted activity. He was not tweeting about the terms or conditions of his employment, nor were any co-workers participating.

This case involved a Facebook conversation between a bartender and his relative. The bartender complained that he hadn’t had a raise in five years and that he was doing the servers’ work without tips. He referred to the establishment’s customers as “rednecks” and said he hoped they all “choked on glass as they drove home drunk.” He didn’t discuss his post with co-workers, no co-worker responded to his statements, and lost his job three months later over the comment about customers. In his charge filed with the NLRB, the bartender claimed he was complaining about the bar’s tipping policy. However, the NLRB found that he had not engaged in protected concerted activity and dismissed his charge. Other cases the NLRB deemed unprotected involved an employee posting on Facebook making fun of a client’s mental illness; individual gripes about managers at the company’s store; and an employee who posted on her local senator’s Facebook page wall about the government contract awarded to her employer, wherein she complained about her employer’s deficiencies and, in so doing, revealed confidential information.

This case involved an employee who worked at the inbound group in a call center for a collections agency. As opposed to the outbound call group, which attempted to contact debtors, the inbound group handled debtors returning messages, as thus had a higher settlement rate. Because callers earned bonuses for each successful payment secured, working for the inbound group was, on average, more lucrative. Naturally, when the employee in question was transferred to the outbound group, she became disgruntled. In a Facebook post containing several expletives, she complained about her employer and stated that she was “done with being a good employee.” If the facts stopped here, her termination would have been lawful.  But several current and former co-workers commiserated on-line, going so far as to propose a class-action lawsuit. A few days later, the transferred employee was let go for disobeying the employer’s policy, which prohibited “making disparaging comments through any media including online blogs, other electronic media, or through the media.” The employee responded by filing an unfair labor practice charge, and the NLRB concluded that the company rule was unlawful because it would “reasonably be construed to restrict Section 7 activity such as statements that the employer is, for example, not treating employees fairly or paying them sufficiently.”  The Board also found that the employee’s threat that she would no longer be a “good employee” had no bearing, since it was a threat she did not have the opportunity to play out. Now for a case that exemplifies an expression of frustration that would not be protected:

In this case, the employee worked for a chain of home improvement stores. After her supervisor reprimanded her, she posted a Facebook status update containing an expletive followed by the company’s name. Four people, including a co-worker, “liked” the status, and two others left sympathetic comments.  She followed this post with a second aggrieved status and, days later, a conversation with one of the sympathetic co-workers.  And, although the co-worker referenced displeasure with her own job, their discussion only touched on work-related issues. In the ensuing days, the employee’s store manager and HR manager called her in for a meeting, wherein they asked her to explain the Facebook status. She told them her feelings and lost her job soon thereafter. Following her termination, the employer issued a new social media policy clarifying its expectations for employees’ social media behavior, and discouraged employees from broadcasting their relationship with the company unless discussing the terms of their employment. The NLRB decided the employee’s comments added up to nothing more than an individual gripe, that she “had no particular audience in mind” for the post, and did not solicit group support or engender extended discussion about working conditions. Aside from upholding the lawfulness of the termination, the NLRB went a step further by analyzing the employer’s subsequently issued social media policy. One could (perhaps rightfully so) question whether the agency was overreaching here, since the new social media policy came five days after the termination. Nonetheless, the NLRB determined the policy unlawful for unduly restricting employees from identifying themselves as such.