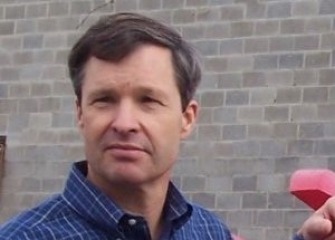 Peter Bowe is the president and CEO of Ellicott Dredges. For 130 years, Ellicott has manufactured dredges and dredging equipment. The company is part of the fabric of American history: its dredges helped dig the Panama canal, as President Obama mentioned during his visit to the facility in 2013. In 2014, SmartCEO Magazine named Bowe its Baltimore CEO of the Year for his shrewd business decisions, which radically turned the company around as it was on the verge of collapse. Today, Ellicott is the world’s foremost dredge manufacturer and sells to over 100 countries, including those embroiled in war and political unrest. Bowe also sits on the board of the World Trade Center Institute, and has helped launch the Institute’s Emerging and Developing Global Executives (EDGE) program with seed funding from the Peter Bowe and Barbara Stewart Foundation, a philanthropic organization he runs with his wife, Barbara Stewart. Peter Bowe spoke with Houpla, Inc. executive producer Brooke McDonald for this interview. BROOKE MCDONALD: What was the inspiration of the edge program for the World Trade Center Institute? PETER BOWE: Well, my wife and I travel a lot for business, and for pleasure and for cultural stimulation. We have been looking for ways to increase the Baltimore international profile. If you think about Baltimore, its roots are all about trade—whether it was the port, in flour and tobacco, or Alex. Brown [& Sons] financing railroads, attracting capital from London—that’s what made Baltimore a great city. I think we have lost that a bit, and frankly today international trade is a very low percentage of the economy in Maryland and Baltimore. It’s ridiculous. There’s a lot of capacity to grow that. The big companies like Black & Decker are not here as much anymore. We need to make sure that the new generation of executives, of college graduates, or entrepreneurs, or foreign investors—the non-American—are aware that Baltimore has great international assets. So how you are going to do that with the EDGE program? In looking at what would make a difference given the resources we had, one of the things we noted is that Baltimore’s young people are not engaged in international as much as they could be and should be. All those young people—they live downtown, they live in Federal Hill or Harbor East—but they’re not thinking as much about international. So we thought, “Let’s start a program that helps rising executives think about how international issues can be good for their career and help their businesses.” What are the elements of the program? We pitched this idea to the World Trade Center Institute, where I’ve been on the board for 30-plus years, and said, “Here’s why we think it can work.” They have their own set of programs and human resources, and we were nervously awaiting their decision to engage, and they did buy into our idea. They have put together a phenomenal curriculum: nine half-day events—everything from international negotiating, international human resources, foreign currency and financial issues, logistics, the whole thing—so it’s not appealing to any single discipline; it’s a broad brush that will expose any participant to all the issues that you face. And they’ll get this from phenomenal resources and then they’ll have the benefit of interacting with fifteen other peers. Who are the companies involved in the launch and in the seminars themselves?It’s a really who’s who of Baltimore’s international financial community. Whether it’s a T Rowe Price or McCormick or Under Armour contributing executives to talk about different issues and it might be something different than what you think. It might be Under Armour talking about logistics, not about marketing, for example. We’ve had applicants from members and folks who aren’t members of the World Trade Center Institute so if we attract a new member from this participation of this program, terrific—that’s one of the objectives. How would you describe the ideal applicant for this program? I think the ideal applicant would be someone who has at least ten years working in management and is either involved in a business which is already international, or wants to go international, and someone who has an open mind to travel and thinks about the world as a bigger place than just Baltimore and the U.S. How do you define success for the EDGE program next year, and in ten years? There are a lot of tangibles and intangibles too. Success would be that the resources who participate are stimulated such that they’ll come back, because they learned and realized what a fun experience it was for them. The participants will have career enhancement. They’ll have expanded opportunities, and they’ll attribute that to their experience here. They’ll learn from their peers. I think that at the end of the day everyone needs to know that the U.S. is just five percent of the world. You’ve got to get outside our borders and you have to participate in that. No business is going to optimize its potential unless it engages in international trade, international investment, participating, being a world business person and a world citizen.