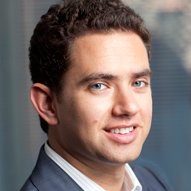 Daniel Freedman is the chief strategy officer and head of business development at Apploi, a networking platform that connects job-seeking professionals with recruiters at burgeoning organizations. The app allows applicants to fill out one profile that remains in the cloud and can be accessed from any device, while interviewers can set customized questions, add video and audio, and score candidates’ responses, thereby filtering qualified applicants from the rest of the pool. Apploi is used by thousands organizations, including Fortune 500 companies, local governments, nonprofits, and a host of small and mid-sized businesses. It has been featured in ABC News, The New York Times, and Mashable. Last year, the White House recognized the company as an American Innovator. Before you started Apploi, you worked in journalism and politics. Can you tell us a bit about where you come from? I was actually born a US citizen although I was born in London. As I tell people, I just speak like the founding fathers, but I always had an interest in America because of my connection. I started off as a journalist, and as a journalist I covered Europe, Africa, and the Middle East. I wanted to learn US, politics so I moved to the US to pursue that and never left. What drew you to journalism? I’ve always wanted to do something that has an impact, and when different opportunities present themselves in a way to have that impact. So, I started off as a journalist where you’re advocating from the sidelines, then I had the opportunity to work at the United Nations and in policy and politics where I could directly help shape policy and help shape what people were doing. Then I had the opportunity to go into the private sector, where sometimes you can move faster than you can in government and have an impact that way. You co-wrote a bestselling book. How did your journalism background influence that? I co-authored Black Banners with an amazing gentleman called Ali Soufan, who was a former top FBI agent. He was at the center of a lot of critical events in America’s history. He was the FBI agent who came closest to stopping 9/11 before it happened, but because the CIA and the FBI were not sharing information, that didn’t happen. He actually got most confessions from Al Qaeda members, and he did it cleanly which was an important lesson to the U.S.: that you can get information and you can do it in line with U.S. values. I think 9/11 woke the U.S. up to the fact that they had to take a stronger line against Al Qaeda, or a stronger line against people who existed out there in places like Yemen, in places like Afghanistan, and in other places. The U.S. was not taking actions it should have taken through the past and there were also flaws within our system, such as the CIA not sharing information with the FBI, people not following up on certain leads or not being able to. And it really shook the US in an important way and woke us up to the fact that we can’t turn a blind eye to what is happening on the other side of the world. Describe the journey into politics—what made you give up the journalistic pursuits? I love journalism and probably would have continued but I was just offered a great opportunity to get involved in policy and politics and work with some really fantastic people. I thought it was too good an opportunity to pass up. And now you’re at Apploi. How did you end up there, and what compelled you about the company? I took the job at Apploi and it was a really exciting opportunity. You know, LinkedIn focuses on the top 20% of the job market; the other 80% of the job market really hasn’t changed on that initial point of interaction between companies and job-seekers. All that’s happened is that the traditional application has gone online but it’s still very one-dimensional and it’s really ripe for disrupting. I am passionate about opportunities focused on young people: the things that give them that first step into a career ladder, a better education, more opportunities—which is really how my interest in foreign policy and my interest in jobs links up, because what you often see is that when people don’t have an opportunity, that’s when they’re enticed by gangs or radical groups. So we make sure people have that right stepping stone, those right opportunities, so it’s less likely that they would turn to unappealing alternatives. What do you bring from your prior experiences to your role at Apploi? Having worked in policy and in politics before gave me a good insight into the way the system works, and also where the gaps in the system are and where the private sector can really help and make a difference. One of the great things about being in a tech company like Apploi is we’re very nimble—we can move very, very quickly, which is often not the case in government, where you have got a lot of red tape and it takes a long time to do anything. We have had terrific situations with Apploi where a nonprofit group or even a government entity will come to us and say, “Listen, we need help in this area.” A day later we’re deployed and we’ve got street teams helping them. One of the big advantages that a private sector brings is speed of action, which, having been in on the other side in the public realm, that’s really not there.