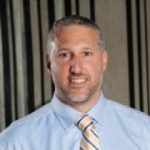 Jay Steinmetz is the CEO of Barcoding, Incorporated. Since 1998, Barcoding, Inc. has provided barcoding and data capture solutions to businesses on an enterprise scale. The company has designed and implements warehouse management systems, mobility systems, inventory control, asset tracking, and more elements of the supply chain. Headquartered in Baltimore, Barcoding, Inc. also has major offices in Chicago, St. Louis, and San Diego; as well as additional locations nationwide. Each year, the company hosts an Executive Forum: a one-day conference aimed at educating organizations in the use of mobile technology.

Q. Are there any politicians who share your particular vision for Baltimore?
JAY STEINMETZ: I was working and living in Baltimore, and I was approached by a councilman who was running for mayor named Martin O’Malley. I listened to some of his ideas and I thought he was a pretty innovative and charismatic leader. I supported his campaign, and I supported him again as governor. We’ve seen some things happen, mostly on the social side but definitely on the— you know, Maryland is a tough state, because he had some pretty good ideas but most of the legislature doesn’t have a frame of reference that comes from the business community, and that’s a huge problem. Because everyone is like, “Well, let’s just take a little bit from these guys. Well, they have all the money and let’s take some from them, because we got to give it to the poor, we got to give it, we got to spread the wealth.” Spreading the wealth is through people who have the wealth by earning it, and when they build these businesses and want to grow, they hire people and those people learn skills and then those people start businesses. You have to make the ecosystem palatable for business.

You look at a farm, you’ve got water, you’ve got sun, and you’ve got soil. Well, the city has the same thing, right? You’ve got taxes, and if taxes are too harsh—and by the way taxes are ridiculous in the city—and you don’t get anything for them, let’s face it: the school system isn’t as good as it needs to be, and yet the taxes are almost double—if not double—than those of the surrounding communities. How does that work?

Q. Do you think these issues are improving at all?
A. We’ve created the problem, and it’s just getting worse. Now when you want to get more money from the state, the formula’s required based upon the value of the property in the city, but half of the property in the city gets tax exemptions, so only if you know who you know and you can figure out a way to build a new system to get tax exemptions do you get the benefits. So, what happens is you have a cycle of companies going in and out—that doesn’t help my business. Why would I want to move to Baltimore city if after 10 years of special tax abatement I’m going to get screwed?

So when I go to BDC [Baltimore Development Corporation] and I say, “This is ridiculous! I’m going to leave this,” they say, “Well, let me show you another property—you can move there and we’ll give you a great deal. We’re going to cut you a deal on taxes, you’ll renovate it.” I don’t want to move my business, I don’t want to move my business so that in 10 years I’m in the same situation.

Q. What’s the solution?
A. To me, we’ve got to stop playing these games that aren’t scalable. We have to stop trying to work special deals with people who are in the know. The day we’re successful is the day somebody starts a business or moves to the city because it’s the best place to start a business, because it’s not expensive to move here, because the labor source is readily available and they’re educated. Now all this may not happen at once, but things are only going to get worse until you have organic growth. My parents taught me that you’re either on the train or waiting at the station and you can’t complain if you’re not going to participate in our economic environment. If you’re not going to be part of the team that helps determine what goes on, or at least participating in the whole concept, then you shouldn’t complain. And there are too many of us that don’t do the research, don’t understand the policy and elect officials based on the way they look or if they’re nice to them or if they know somebody who knows them. We need to hold these people accountable, we need better tools to do that. I think that’s going to be the next thing that comes out are better tools, better technology that holds politicians accountable for how they operate. Because right now we’re not headed in the right direction, and if you go the wrong direction you don’t turn around. You’re going to get where you’re headed. You know, you find people telling you, “Well, this person is going to win the election or, these are the people who are.” So, all of a sudden, you find yourself picking from the people they tell you to pick from but you don’t have to be that way. You don’t have to follow—you can vote, but vote on who you believe is the best candidate, and start working the system to change the system.

Connect with  Jay on LinkedIn