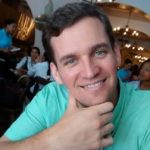 Justin Kersey is the CEO (Chief Eats Organizer) of Baltimore Eats for Good. The organization is behind a city-wide fundraising effort this summer supporting dozens of Baltimore-area nonprofits. With more than 40 restaurants, businesses, and cultural venues signed on, the group aims to raise $1 million for local causes. Baltimore Eats for Good will be launching its campaign on July 28th.

Could you give us a rundown of the campaign? What is Baltimore Eats for Good and who’s involved?
JUSTIN KERSEY: Baltimore Eats for Good is a Baltimore area-wide campaign that brings together restaurants and nonprofits. Currently, we have participation from 35 nonprofits including Big Brothers Big Sisters, Boys & Girls Club, Casey Cares, and the Baltimore Humane Society. On the restaurant side, we have a lot of great restaurants from the Inner Harbor area, from Canton, from Fell’s Point, from other parts of the city. The campaign is going to be launching on July 28th. Each nonprofit that’s participating with us will have their own campaign page and a bunch of deals from the different restaurants that are also participating. And so, on July 28th, the campaign will kick off, nonprofits will share the campaign page with their friends, family, and supporters; and instead of donating $20, and getting a thank you in return, supporters will give $20—contribute $20 to a nonprofit—and in return get hundreds of dollars of great deals.

How do the deals compare to other kinds of coupons?
Through Baltimore Eats for Good, it doesn’t have to be, you know, spend $15 to get $30 worth of food. We do complimentary appetizers, complimentary desserts—percentages off, so 25% off, 35% off, 45% off. We also do the spend $30, get $15 off, or spend $30, get $10 off. We do the same thing, but instead of a company like LivingSocial benefiting, nonprofits benefit. But because LivingSocial exists, we have a much easier time explaining what it is that we do.

What’s the end-goal?
Our objective with this campaign and our ultimate goal is to help raise $1 million for great causes and nonprofits in Baltimore, and promote generous community-oriented restaurants that support nonprofits, so it’s dual-focused: support nonprofits, help them raise money, as well as promote great community oriented restaurants and ideally generate some traffic for them and create reciprocity between the nonprofit, restaurant, and wider Baltimore community.

How do you find nonprofits to support?
The way that we come into contact with nonprofits by and large, for Baltimore Eats for Good, started out with me working with networkers and influencers. That’s where somebody like Peter Jackson, who was previously with GiveCorps, and Vanessa Milio, who’s a nonprofit consultant in Baltimore—she used to be the CEO or Executive Director of the Harford County Chamber of Commerce—they know a lot of nonprofits in the area, and they essentially introduced me to their friends in the nonprofit world, and gave me a good recommendation. Once we were able to get 10–15 nonprofits via influencers or connectors, I was then able to point to those nonprofits when I made outreach to other nonprofits and say, “Look, these 10–15 nonprofits are already on board. Here’s what we’re doing. Would you give me 15 minutes of your time?”

So, we really built the concept and the campaign by networking early on, and now that I have material and several more nonprofits on board, I do a lot of social media posting aimed on marketing, and we try to do speaking engagements where possible.

How can people spread the word?
Each of our nonprofit partners will have their own campaign page that they’re going to share with their audience via email, social media, and we have some embed features so that they can create a portal onto their campaign page right on the front page of their website. We’re also going to be promoting the campaign via some of our tech partners, so OrderUp has graciously agreed to support us and to provide some marketing and PR for us. WYPR will also help us launch the campaign and support us throughout the length of the campaign.

Again, it’s launching July 28th and will run through the end of August. We’re very excited about it, and, hopefully, this is just the start, and we look forward to a lot of success in helping great nonprofits and great restaurants in Baltimore come together for win-win partnerships.