The ten to twenty-five minute on-air interviews are really informal POSITIVE conversations. Guests may be asked about their background education, influences, mentors and early career experiences, asked about their business, what they do and who they serve. They may be asked about opportunities ahead, challenges they have faced or their senior management team. Interests outside of work, personal turning points and family sacrifices capture the unique human aspect behind these prominent leaders. All of these questions are designed to help our audience learn “what it takes to succeed.” Click here to listen to the webcast of Rokas Beresniovas’ Executive Leaders Radio interview. 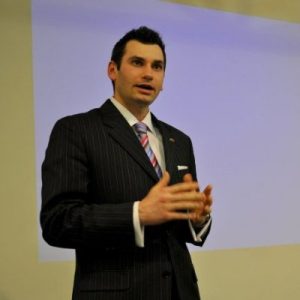 Rokas Beresniovas is a leader in the DC business community. Presently, he works as a Vice President and head of expansion at the State Bank of India in Washington, DC.

Born in Lithuania, Rokas emigrated to the U.S. with a marketing degree from Kaunas College. He began his career in the retail industry as Southwest Regional Distribution Manager with Whole Foods Market in Dallas and then became Specialty Operations Manager in Washington, DC. At Whole Foods, Rokas received two Regional Awards for Excellence. He also won several awards and boosted revenue working as head of one of the largest DC stores in the CVS Caremark Corporation from 2004 to 2006. In 2006, Rokas began his work in the financial services sector with Bank of America. In August 2007, Eagle Bank hired Rokas as a Vice President of Business Development for the Washington DC market where he helped grow the bank by double digits. He also brought in key banking relationships with entertainment professionals, politicians, local schools and hospitals. Following this success, Rokas was recruited by HSBC Bank USA, one of the largest banking and financial services organizations in the world. As Vice President of Global Business Banking, Rokas helped grow and sustain their international presence in the Washington DC market. In 2013, Rokas was recruited by the State Bank of India USA to head its east coast business expansion. Giving back to the community is also important to Rokas. In 2007, he joined the GBA and was named VP in 2011 and President in 2012. In the past, Rokas served on the Board of Directors for the CSAAC, the GMC, Young Executive Society of DC, and the NJH. Currently, Rokas is a founding board member of Pebbles of Hope and the Perisphere Theater. He is also an honorary board member of The Embassy Series. Rokas is the founder of the Lithuanian nonprofit organization Global Lithuanian Leaders (GLL)