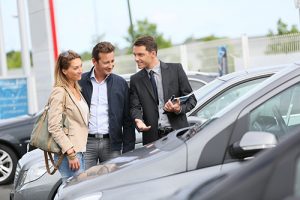 You may have been there before: you enter your favorite car dealership to have your vehicle serviced and are greeted by a friendly dealership employee who questions you about issues you may be experiencing and guides you toward certain services the dealership’s in-house mechanics may offer. What you may not realize is that these friendly greeters, referred to in the industry as “service advisors,” are often salespeople paid on a commission basis as determined by their sales. Until somewhat recently, these individuals were treated as exempt from the overtime requirements of the Fair Labor Standards Act (the “FLSA”) and the regulations promulgated thereunder. The exemption stems from a long-standing statutory carve out which provides that any “salesman, partsman, or mechanic primarily engaged in selling or servicing automobiles, trucks, or farm implements” is exempt if “employed by a nonmanufacturing establishment primarily engaged in the business of selling such vehicles or implements to ultimate purchasers.”[i] Since service advisors are in the business of selling services to auto dealership customers, they have historically been classified as salesmen and concomitantly exempt. The application of this interpretation exempting service advisors has also received judicial imprimatur from a number of federal courts.[ii] In April of 2011 the Department of Labor promulgated a regulation that appeared as though it would change the landscape. The apposite regulation, 29 C.F.R. § 779.372, restricts the relevant definition of “salesman” to “an employee who is employed for the purpose of and is primarily engaged in making sales or obtaining orders or contracts for sale of the automobiles, trucks, or farm implements that the establishment is primarily engaged in selling.”[iii] In other words, the regulation appears to exclude from the definition of “salesman” a service advisor, who is engaged in selling services—not vehicles. Notwithstanding the existence of the regulation, until recently courts which have squarely addressed the overtime exemption have, based on a procedure governing the deference to which administrative agencies are provided, rejected the regulation.[iv] On March 24, 2015, the Court of Appeals for the Ninth Circuit became the first federal court to break rank and hold that service advisors are not exempt from overtime requirements.[v] In so doing, the court created a split amongst U.S. federal courts. More significantly, the Ninth Circuit’s decision has created a precedent which presents dealerships with significant uncertainty, inviting litigation by aggrieved service advisors. Under the Navarro court’s reasoning, the regulation must be given deference because the language of the statutory exemption is ambiguous and the regulation is a reasonable interpretation of the statute. By the court’s somewhat tortured logic, the phrase “salesman, partsman, or mechanic primarily engaged in selling or servicing automobiles, trucks, or farm implements” cannot be read as “salesman. . . primarily engaged in . . . servicing automobiles” for the same reason that the phrase “if my dogs or cats are barking or meowing, then I know that they need to be let out” may not be read to indicate that dogs are meowing and cats are barking.[vi] As such, the term “salesman,” explained the court, is appropriately limited to one primarily engaged in selling automobiles and trucks—not services for automobiles and trucks. That the Navarro case was decided by a court sitting in California does not mean that dealerships in the mid-Atlantic region should turn a blind eye to the potential repercussions. The Third Circuit, which encompasses the states of Delaware, Pennsylvania, and New Jersey, has not had an opportunity to decide whether service advisors are exempt from overtime pay, and the Navarro case, although not binding, is certainly persuasive in this regard. Moreover, although the Fourth Circuit (encompassing Maryland, North Carolina, South Carolina, Virginia, and West Virginia) previously held that service advisors are exempt from overtime pay, the split created by Navarro is ripe for review by the United States Supreme Court. Indeed, court watchers believe that this case may reach the Supreme Court for decision. Given the Court’s prior precedent concerning agency deference, it is a distinct possibility that the Supreme Court will conclusively establish that service advisors must be paid overtime under the FLSA. As such, automobile dealerships along the Eastern seaboard would be wise to consult with competent labor and employment counsel to evaluate their pay structure. The attorneys in Offit Kurman’s labor and employment group, who are well-versed in the nuances of the FLSA, would be happy to discuss and develop plans and strategies to ensure that your dealership remains on the right side of the ever-changing legal landscape. [i]               29 U.S.C. § 213(b)(10)(A). [ii]               See, e.g., Brennan v. Deel Motors, Inc., 475 F.2d 1095 (5th Cir. 1973); Brennan v. N. Bros. Ford, Inc., No. 40344, 1975 WL 1074 (E.D. Mich. Apr. 17, 1975), aff’d sub nom. Dunlop v. N. Bros. Ford, Inc., 529 F.2d 524 (6th Cir. 2976) (table); Brennan v. Import Volkswagen, Inc., No. W-4982, 1975 WL 1248 (D. Kan. Oct. 21, 1975); Yenney v. Cass Cnty. Motors Co., No. 76-0-294, 1977 WL 1678 (D .Neb. Feb. 8, 1977) (unpublished). [iii]              29 C.F.R. § 779.372(c)(1) (emphasis added). [iv]              See, e.g., Walton v. Greenbrier Ford, Inc., 370 F.3d 446, 450-53 (4th Cir. 2004); Thompson v. J.C. Billion, Inc., 368 Mont. 299, 294 P.3d 397 (2013). [v]               See Navarro v. Encino Motorcars, LLC, 780 F.3d 1267 (9th Cir. 2015). [vi]              Id. at 1275.