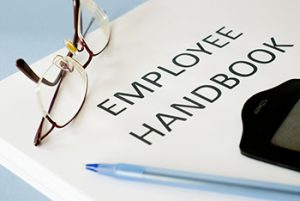 On March 18, 2015 the National Labor Relations Board’s (“NLRB”) General Counsel, Richard Griffin, Jr., issued an extensive report in which he purported to provide helpful guidance to employers on how to structure various Employee Handbook provisions in a manner that will pass muster under Section 7 of the National Labor Relations Act (“the Act”).  That section, in simple terms, gives employees the right to engage in what the Act defines as “concerted protected activity” for purposes of discussing wages, hours and terms and conditions of employment. Historically it has been unusual for the Board to pay much attention to non-union companies’ work rules or Employee Handbooks.  That is no longer the case.  Thus, the Board is now strongly focusing on Employee Handbook provisions that are deemed to possibly be violative of the Section 7 rights of employees, including non-union employees. In his memo (which can be easily accessed by going to the website of the National Labor Relations Board at www.nlrb.gov, and then accessing a pull down menu for “reports and guidance” and then further accessing “General Counsel Memos”), Mr. Griffin attempts to provide guidance on 8 different categories of employer rules: (1) Employer Handbook Rules Regarding Confidentiality; (2)Employer Handbook Rules Regarding Employee Conduct toward the Company and Supervisors; (3) Employer Handbook Rules Regulating Conduct Towards Fellow Employees; (4) Employer Handbook Rules Regarding Employee Interaction with Third Parties; (5) Employer Handbook Rules Restricting Use of Company Logos, Copyrights, and Trademarks; (6) Employer Handbook Rules Restricting Photography and Recording; (7) Employer Handbook Rules Restricting Employees from Leaving Work; and (8) Employer Conflict-of-Interest Rules. Under each of the 8 categories of Employer Rules, Mr. Griffin provides examples of those policies that the Board would find to be permissible and those which the Board would find to violate Section 7 of the Act.  The problem with his explanation and examples is that it is frequently difficult to ascertain the difference between those examples that are deemed to be in compliance with the law and those that are not. Because this is a very technical area of the law, we strongly advise employers to have their Handbooks closely vetted by employment counsel to assure, to the extent possible, that their Handbook provisions do not expose them to liability under the National Labor Relations Act, which can have serious consequences for employers if such provisions are found to be legally deficient.

Howard K. Kurman, former chair of the firm’s Labor & Employment Department, regularly counsels clients on all aspects of proactive employment/labor issues. He represents employers ranging in size from as small as 20 employees to those employers with geographically disparate locations consisting of over 4,000 employees. Mr. Kurman assures, through regular contact with his clients, that they promulgate and maintain the most effective employment policies that will, to the extent possible, minimize their legal exposure in today’s litigious workplace. You can also connect with Offit Kurman via Facebook, Twitter, Google+, YouTube, and LinkedIn. WASHINGTON | BALTIMORE | FREDERICK | PHILADELPHIA | WILMINGTON | VIRGINIA