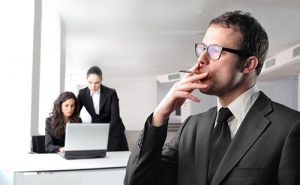 Difficult workplace personalities are not just nuisances, they are detrimental to employee productivity, morale, and—in some cases—health and safety. When employees can’t be managed to conform within standard workplace rules and personal boundaries, they typically should result in termination.

It should be said that there are more than five types of troublesome personalities, and most individuals don’t neatly fit into one category or another.  Nonetheless, we have seen a few characteristics show up frequently in our work with employers and as a result, Frieman has developed strategies for handling challenging people on an individual basis and addressing them from an employer’s perspective.

A bully is more than a personality type: it is a set of behaviors with disciplinary ramifications. Indeed, many workplaces are starting to adopt anti-bullying policies to address these intimidating people. A bully is someone who abuses her authority to prey upon “weaker” people in the office. Bullying manifests in different ways, some of which may be difficult to identify, especially for those the bully does not target. “When people hear the word ‘bully,’ they often automatically assume it’s some meathead jock,” says Frieman. “But that’s not always the case. Bullying is strictly about power—not age, gender, or size.” However, he says, as is the case for the stereotypical musclebound image, the only way to beat a bully is through confrontation. If someone is taking advantage of you, maintain your composure and do not relent. Bullies are sometimes petty: they may ask you to run errands or do menial work that is not included in the scope of your job. In these cases, politely refuse the request and walk away. “Keep conversations short,” says Frieman. “Don’t stick around for the debate. Don’t humor them or laugh at their jokes. It’s not about trying to degrade them—even though they probably deserve it—but putting them in their place. You don’t want to look like a pushover. A lot of the time, bullies will do or say things in public. If you can sting them back, or show that you don’t tolerate their behavior, they lose their power.” Many employers have adopted anti-bullying policies to address these situations. Bullies don’t always bully on the basis of someone’s protected classification (e.g., race, color, disability, religion), so including an anti-bullying policy gives the employer additional ammunition to remove an employee who violates the policy.

Every workplace has at least one gossiper. They come in all forms and genders. Unlike bullies, those interested in gossip are often friendly, and may go incognito until the chance for a one-on-one conversation presents itself. Gossip is insidious. It thrives in layers of secrecy and concealment. As Frieman writes in REPLY ALL…and Other Ways to Tank Your Career, “The Gossip lives in a world of lies and distorted truths, and wants you to join in the scandal.” Frieman says there are a few key phrases gossips tend to use, such as: “Just between you and me,” “I have to tell you something,” and “Did you know?” “When you hear these things, run for the hills!” he says. “If you engage, you become part of the gossip chain.” Whether the situation is funny or severe, you are now culpable for sensitive knowledge and you could get in trouble whether you choose to share it or keep it a secret. So how can you avoid the gossip? “It sounds too easy, but just walk away from it,” says Frieman. “If you don’t want to know something, don’t dig for questions. If you start to hear a conversation, ignore it; pretend like you’re not listening. Even if you can’t help but overhear, if you’re not engaging, there’s no proof, and you’ve broken the chain.” A workplace of gossipers is a workplace of unproductive employees. This is where the employer should implement progressive discipline. For example, if an employee is missing deadlines, can’t be found throughout the day or has become a disruptive force, they should be warned and disciplined accordingly.

Slackers avoid work and responsibility. They disregard the obligations of their roles and make constant excuses. “Everyone gets mad at the slacker, but people also feel pity for the slacker,” says Frieman. “Like, ‘Don’t give it to Dave. Dave will never do it.’ Then why is Dave here? I don’t understand why the slacker often gets a free pass for being lazy. To me, there is no three-strike rule for a slacker: you either have to shape up or leave. No one wants to promote the slacker; no one wants to work with them. They just kind of hang around until they get fired.” Despite the anger you may feel at someone who is simply collecting a paycheck without putting in the work, you still have to give slackers opportunities to turn their behaviors around. From a legal perspective, you need to be able to prove, preferably through documentation, that there was written criteria an individual consistently failed to meet. If one of your employees is slacking off, make sure to keep close and detailed records on their progress—or lack thereof. Not all slackers are irredeemable. To help an employee who has lost her enthusiasm, learn what incentivizes her. Ask directly what would motivate her, where she sees herself in five years, or what her dream job looks like. Once you know what motivates a slacker, it’s easy to keep her on track and determine whether the culprit is the personality or the environment.

We have all worked with someone who is constantly away from his desk taking a cigarette break. Regardless of your views on smoking, you may not be able to prevent smoke breaks outright. You can, however, set reasonable limits and expectations.  Their brief “pauses” are often in reality much longer interruptions in the workday. “People will say they can take as many smoke breaks as they want because they ‘need’ it,” says Frieman. “They think, ‘It’s just a smoke break—it’ll take three minutes.’ It’s not three minutes. It’s putting on your jacket, walking downstairs and out of the office, lighting up, talking to a friend… Then if someone else comes out, you have another one. Then you’re done, you go back upstairs, take your jacket off, sit back down in your chair, put a couple breath mints in—if you’re polite—and then go on with the day. It’s 20–30 minutes out of the day.” If it were any other habit, he argues, employers would not stand for it. Smoking should not be a free pass to continually put off work. Advice to employers: set reasonable limits on breaks to maintain productivity. Give firm time parameters and specified locations. Again, warnings and the use of progressive discipline are handy tools to curb abuses.

A flirt is one who makes indirect or suggestive sexual advances towards others in the workplace. A flirt’s behavior may be excessive and unwanted: the recipient of the attention may feel harassed, which is separate legal issue that warrants its own discussion. For now, let’s assume the flirtation does not fall into the realm of harassment, and focus on how to stamp out a flirt’s annoying and distracting conduct. “Flirts tend to think their behavior shows a sort of confidence or cool,” Frieman says. “Like ‘We’re just playing around.’ I don’t get that. It seems creepy and incredibly sleazy to me. It can be very hard to tell the person to stop, because you may feel like it makes you look like you’re not playing the game, or you don’t want to offend them. It’s a sentiment I don’t understand. Simply tell the person, ‘Listen, I don’t like when you make comments about how I look in these pants,’ and they’ll stop out of fear. You don’t have to play along.” Frieman stresses that when both parties participate in a flirtatious conversation, they are making a choice. Regardless of the flirt’s relationship or marital status, they engage in flirtation to get some kind of reaction. They know exactly what they’re doing. While this is sound advice for peer-to-peer interactions, the situation gets more complicated when there is a higher-up involved. Frieman says, “If you see someone in a high-ranking position making inappropriate comments to a subordinate, say something. Speak up. The duty of HR is to address imbalances of power by bringing them out into the open.” Flirts sometimes don’t realize their actions are offensive or unlawful and can cause excessive stress and discomfort. A worst, flirts can invite legal claims against their employer. Management and HR should be cognizant of what is happening and demand the flirt undergo one-on-one sensitivity training and/or workplace harassment training. If your business could use some help better managing these 5 personality types or the company could benefit from annual workplace harassment training or policy updates, let’s talk.  It’s management’s responsibility to ensure a safe, cohesive, and productive workplace.