Executive Leaders Radio conducts “elite interviews” of prominent CEOs, CFOs, and Presidents focusing on “what makes them tick.” The ten to twenty-five minute on-air interviews are really informal POSITIVE conversations. Guests may be asked about their background education, influences, mentors and early career experiences, asked about their business, what they do and who they serve. They may be asked about opportunities ahead, challenges they have faced or their senior management team. Interests outside of work, personal turning points and family sacrifices capture the unique human aspect behind these prominent leaders. All of these questions are designed to help our audience learn “what it takes to succeed.” Click here to listen to the webcast of Prachee Devadas’ Executive Leaders Radio interview. 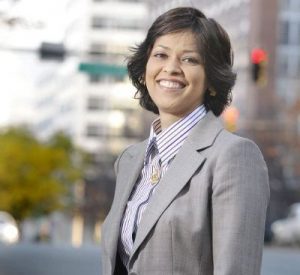 Prachee J. Devadas is the founder, president, and CEO of Synergy Enterprises, Inc. Started in 2003, Synergy grew from a two-person operation at a kitchen table into one of the most important small consultancy firms in the Washington, DC-metropolitan area, even earning Devadas several visits to the White House including a a meeting in the Oval Office as well. Ms. Devadas’ efforts as an enterprising small business owner were also recognized by President Barack Obama at a Rose Garden Press Conference in June of 2011.Ms. Devadas earned her Bachelor’s degree in economics from the University of Pune before immigrating to the US. Before founding Synergy, she worked for several small businesses in various management capacities. She has received Distinguished Service Awards from the National Association of Professional Asian American Women in 1996, 1997, 2000, and 2002. She is also actively involved in several charities in and around the nation’s capital, which she speaks about in more detail below. You can connect with Offit Kurman via Facebook, Twitter, Google+, YouTube, and LinkedIn.