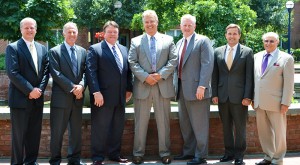 The members of the law firm of Severn & Kresslein. P.A., have joined Offit Kurman, which had affiliated last year with another Frederick law firm, Seymour B. Stern & Associates. The new affiliation will be effective August 1, 2014 and continue to occupy its present offices at 50 Carroll Creek Way, Suite 340, in Frederick.

The announcement was made by Ted Offit, the co-founder and managing principal of Offit Kurman, who stated: “We are delighted to have Dave Severn, Bob Kresslein and Ian Bartman join Offit Kurman. Dave, Bob and Ian are outstanding lawyers and more importantly, true leaders in the Frederick community. In addition, we are pleased with our rapid growth in our Frederick office. Offit Kurman entered the Frederick market in 2013 through affiliation with Seymour Stern. With the addition of the Severn Kresslein team, Offit Kurman will have eight lawyers in Frederick making Offit Kurman one of Frederick’s largest law firms.”

Click here to find out more about Offit Kurman’s growth in Frederick, MD.