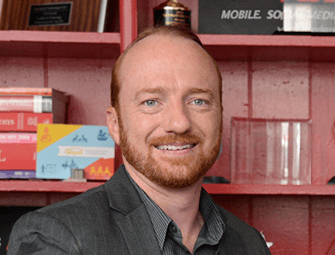 Todd Marks, President and CEO of Mindgrub – the first and largest mobile app developer in the Mid-Atlantic — was teaching computer science and math in the late 90s. When the internet took off, it was obvious to him that would become a transformative platform for teaching and learning. With that notion and fueled by entrepreneurial drive, Todd quit his day job, waited tables at night, and started Mindgrub in his basement in 2002. Fast-forward to earlier this year when the Google Glass API was released, Mindgrub wasted no time exploring its functions and started researching and developing apps for Google Glass. With product company viaPlace (a proprietary, white-label location-based service framework), Mindgrub has been working on location-based walking tours for Google Glass – university campuses, for example — and other wearable technology such as SpaceGlasses, iWatch, Pebble, and the Samsung Galaxy Gear.In May 2014, mobile, social and web applications consultancy Mindgrub moved its offices from Catonsville to the Locust Point neighborhood of Baltimore City, more than doubling its footprint to support its growth.Todd really never left the classroom, though. He teaches and lectures on technology internationally and sits on the advisory boards for Loyola University’s MBA program and the Chesapeake Regional Technology Council (CRTC).What could Mindgrub Labs’ R+D have in store for mobile application development? There may be clues in the latest movie releases. Futuristic technology sci-fi film fan Todd says 2002’s Minority Report provided the catalyst for viaPlace. Check out our interview with Todd Marks on city biz list, by clicking here.