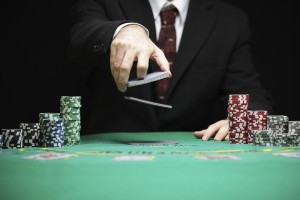 Duane Haughton, Michael Sneideman, Cuong C. Tran, Cuong V. Phung, Alvin Vatanavan and Christopher Korres are suing the Borgata for its alleged negligence in its Borgata Winter Poker Open in January. The problem: counterfeit poker chips. The tournament had to be suspended when it was discovered that $800,000 worth of fake chips were put into circulation.

“[The] Borgata operated the Winter Open in a manner inferior to that in which a reasonably prudent casino would have operated the Winter Open,” the complaint says. The casino failed to adequately supervise entrants, failed to regularly conduct an inventory of the chips in play, and continued the tournament for a time despite warning signs about the counterfeit chips.

“We believe our clients’ claims are reasonable, and we find it appalling that the Borgata put on such a sloppy and mismanaged poker tournament and yet has coordinated an outcome that has not cost it so much as a dollar,” said Offit Kurman attorney.

Recently, the New Jersey Division of Gaming Enforcement ordered the Borgata to pay $50,893 in prizes that had not been disbursed because of the counterfeit chip incident, and $1.7 million to potentially impacted players:

However, the six players involved in the suit believe this is not enough. If the final 27 players had decided to chop unallocated prize funds of about $1.4 million into even increments, each would have received close to $52,000.