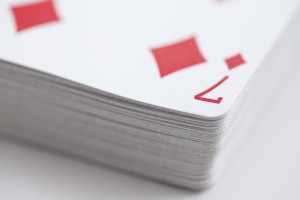 Offit Kurman business litigation attorney  is a regular contributor to the site pokernews.com. In one of his recent articles, “Sorting Out The Law Behind Phil Ivey’s Edge Sorting Debacle At Borgata,” Offit Kurman attorney weighs in on the Borgata lawsuit against poker player Phil Ivey, his associate Cheng Yin Sun, and Gemaco, Inc., a playing card manufacturer.

Ivey and Sun took to the Borgata for a series of marathon sessions of Punto Banco and Mini Baccarat, essentially the same game. If you are not familiar with baccarat, it is a pure game of chance dealt with a standard 52-card deck. The house has a narrow edge. That edge is all but negated when a player has knowledge of the next card to be dealt, knowledge it appears Ivey and Sun just so happened to have. How is this possible? “Edge sorting!”

What is edge sorting?

It is nothing more than the strategic exploitation of inconsistencies in the way patterns on the back of playing cards are cut. In this case, the playing cards were manufactured by, you guessed it, Gemaco, Inc. And if one looked closely at the back of these cards, he or she could see inconsistently cut patterns, tipping the gambler off as to the next card.

“Ivey and Sun realized this, sat for marathon sessions of baccarat, and ensured cards were turned such that certain favorable members of the deck had backs facing one way, while others faced the opposite way, according to the lawsuit,” explains Offit Kurman attorney.

“At a poker table, the introduction of conditions such as this would send up more red flags than a May Day parade in Tiananmen Square,” said Offit Kurman attorney. “But in the superstition-laced world of baccarat, these demands actually register as somewhat mild on the scale of relative voodoo.”

“There is no real precedent for cases like this, and when the judicial system cannot find precedent, it goes in search of analogy — something that does not much help here, either, because edge sorting is not truly analogous to anything other than an honest game of three-card Monte, and that is something of an oxymoron unto itself,” explainsOffit Kurman attorney.

In total, Ivey and Sun face 12 counts in this lawsuit.

Click Here to read the article in its entirety.