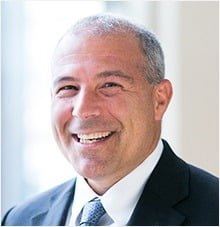 In his over 30-year career as a patent litigator, Tony Pezzano has successfully tried cases involving technology innovation across a diverse range of industries − particularly consumer, recreational and pharmaceutical products; chemical and petroleum products and processes; wireless telecommunication devices and equipment; computer software, hardware and systems; video and audio broadcast equipment, systems and networks, and printing engines and systems. He has appeared in numerous trials in the federal district courts, including both bench and jury trials, and International Trade Commission (ITC) Section 337 Hearings.

Another major focus has been Tony’s practice in ITC Section 337 investigations. He has successfully represented both Complainants and Respondents in ITC Section 337 investigations involving biologics, SeaDoos/WaveRunners, wireless communication devices, including mobile phones and tablets, computer routers and Segway/hoverboards.  Tony is Past President (2009) of the ITC Trial Lawyers Association.

Many significant companies around the world have called on Tony for representation in large-scale patent litigations in the federal district courts and ITC.  Few attorneys, if any, can match Tony’s record of obtaining injunctions in federal district court cases as well as exclusion and cease and desist orders in ITC Section 337 investigations.

Tony has also prosecuted patent and trademark applications and rendered opinions and counseling for US and foreign corporate clients involving intellectual property matters.

Tony chairs Offit Kurman’s monthly patent subgroup meetings.  He is a frequent author and lecturer on biopharma patent litigation, including Hatch-Waxman litigation, and ITC Section 337 investigations. His most recent publications and presentations include:

Tony has been consistently ranked in the Legal 500 US and listed in the prestigious IAM Patent 1000, which called him a "top-notch and untiring litigator… the first in the door and the last out." He has also been named to the Best Lawyers in America list in 2023.